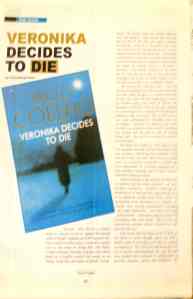 Suicide! What drives a human being to commit an act so against the natural order of things? Against survival? Against Life! One would normally expect a traumatic experience as the basis of doing that. But Paulo Coello’s heroine Veronika is pretty calm about death. In a horrific manner she seems to be ‘doing’ death like one hears of people ‘doing’ drugs. The reason? Life just doesn’t seem to have any purpose. She ‘s twenty four and has had her fill of life, she’s got a job, a family, boyfriends….and yet 11 November 1997 sees her wanting to die. She decides to give a very obscure reason for wanting to die…a Brazilian writer Paulo Coello (here Coello has cleverly used his own name) has written an article which has begun by asking ‘Where is Slovenia?’ Slovenia – Her country! Taking this as an insult, this is what she must write as the reason for dying  in her last letter. She believes herself to be completely normal.

Her reasons for wanting to die – ‘ The first reason: everything in her life was the same and once her youth was gone, it would be downhill all the way, with old age beginning to leave irreversible marks, the onset of illness, the departure of friends. She would gain nothing by continuing to live; indeed, the likelihood of suffering only increased. The second reason was more philosophical: Veronika read the newspapers, watched T.V, and she was aware of what was going on in the world. Everything was wrong, and she had no way of putting things right – that gave her a sense of complete powerlessness.

She plans her death in a cold logical way. The mundane-ness in her attitude of the task at hand is terrifying. For example, if she cuts her wrists, the nuns (she lives in a rented room in a convent) would have to clean the room afterwards. So ‘shooting, jumping off a high building, hanging, none of these options suited her feminine nature’.

More terrifying is the manner in which she is experiencing the whole situation – as JUST another experience. Without realizing the implications of their actions, some people give in to whatever catches their fancy. When the excitement of an adventure is warped.

‘At twenty four, having experienced everything she could experience – and that was no small achievement – Veronika was almost certain that everything ended with death. That is why she had chosen suicide: freedom at last. Eternal oblivion.’

And where did God figure in all of this? ‘In her heart of hearts, though, there was still a doubt: what if God did exist? She is insolent towards God. ‘He will know that there are limits to human understanding. He was the one who created this confusion in which there is poverty, injustice, greed and loneliness. He doubtless had the best of intentions, but the results have proved disastrous; if God exists, He will be generous with those creatures who chose to leave this Earth early….

Thus with thoughts like these to keep her company, Veronika decides to take the plunge. But sometimes we don’t have control – even over death. Her overdose of pills doesn’t work and she wakes up with an irreparably damaged heart. NOW she will surely die in a weeks time. And Veronika realizes that waiting for death knowing that it will surely come is a different ball game altogether. To add to the agony, she’s in a special institution called Villette, that’s reserved for the ‘mentally delicate’ or should we stop beating about the bush and simply use the word ‘mad’. Villette is a famous and much-feared lunatic asylum.

‘Villette was the place from which no one had ever escaped, where genuine madmen  – sent there by the courts or by other hospitals  – mingled with those merely accused of madness or those pretending to be mad.’

Here, in Villette, she comes across different characters. As the characters reveal their stories, Veronika is forced to ponder upon the whole phenomena of madness. Many characters now living in the asylum are able to live their lives in a more spontaneous manner as compared to the lives lived before they entered the asylum. Does that make them mad? A particular group that calls itself the fraternity doesn’t even want to leave Vilette. Imagine, the need to pretend to be mad, just so you could behave the way you wanted to.

The various scenes depicting Veronika’s life (and her growth and understanding and final coming to terms) in Villette don’t have a particular sequence. There is the reminiscing of various characters, parts of their lives leading to ending up in the asylum described in graphic details. The spiritual touch is given by the appearance of a Sufi master. There are Veronika’s ups and downs, her playing of the piano on moonlit nights, her falling in love. Some of the ideas in the book are easy to comprehend. The Sufi Master for example talks of Nasruddin, a great Master who was scheduled to give a lecture. He never arrives on time, appears drunk and then starts flirting with a woman sitting in the front row. Of the thousand  people who had come to see him only nine are left.

Nasruddin got up; he was completely sober, his eyes glowed, and he had about him an air of great authority and wisdom. “Those of you who have stayed are the ones who will hear me,” he said. “You have passed through the two hardest tests on the spiritual road: the patience to wait for the right moment and the courage not to be disappointed with what you encounter. It is you I will teach”

Regarding the other messages that Coello is trying to put across, the reader has to grapple. Perhaps Coello is trying to say that being different from what the norm does not make a person mad. Mad people live in their own world. These are the Schizophrenics, the Psychopaths, the maniacs. But others like Edmund Hillary who conquered Everest or the Beatles who created a new kind of music also lived in their own world. Does that make them mad?

The following lines said by the doctor of Villette to a patient perhaps best explain the crux of the book.

‘Each human being is unique, each with their own qualities, instincts, forms of pleasure and desire for adventure. However, society always imposes on us a collective way of behaving, and people never stop to wonder why they should behave like that.

When the patient asks him if she is cured, the doctor replies

‘No. You’re someone who is different, but who wants to be the same as everyone else, And that in my view is a serious illness’

‘Is wanting to be different a serious illness?’

‘It is if you force yourself to be the same as everyone else:it causes neuroses, psychoses and paranoia. It’s a distortion of nature, it goes against God’s laws, for in all the world’s woods and forests, He did not create a single leaf the same as another.

If wanting to be different is not madness then what is it? Or what about those who try to be different just so that they can impress others? When does wanting to be different fall into the cadre of madness? Is it when one does things thinking what others will think of them rather than doing things that come naturally to them?  There are simply no clear-cut answers presented by Coello and the ambiguity leaves one to ponder and find answers of ones own. Is that what Coello is trying to do? Provoke each one of us to question the ideas he presents as they pertain to our life experiences? That is for the readers to decide.

Harmony is about balance. Yes, indeed we are made differently and perhaps the more artistic among us find attaining that balance more challenging than the others. In light of this thought perhaps pondering over things (Like everything else) should also be done to a certain extent.

Lets end with some really peaceful words spoken by one of Coello’s characters:

‘What was Sufi meditation? What was God? What was salvation, if that is, the world needed saving? Nothing. If everyone outside there – and outside Villette too – just lived their lives and let others do the same. God would be in every moment, in every grain of mustard, in the fragment of cloud that is there and then gone the following moment. God was there and yet people believed they still had to go on looking, because it seemed too simple to accept that life was an act of faith’